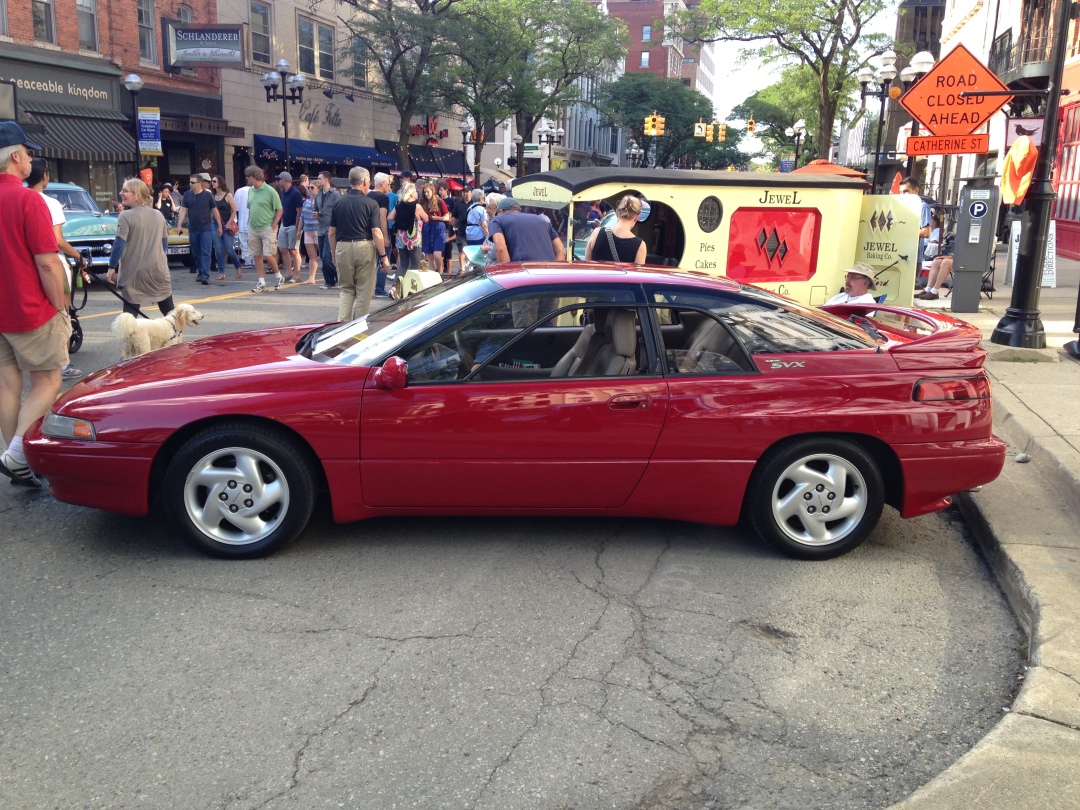 This has been a very weird week for me: although I’ve been surrounded by a bright and cheery Michigan summer filled with fun things to do, I’ve also been preoccupied with the many dark and dispiriting news stories surrounding the death of Chinese Nobel laureate Liu Xiaobo, who died on Thursday while still serving an 11-year prison sentence. Below, I’ll talk about some of the lighter things first and then briefly discuss Liu Xiaobo at the end, with apologies for the jarring shift in tone.

▪ Since I moved here at the end of July last year and spent August getting settled, I didn’t really notice how many things there are to do in Ann Arbor over the summer. On a very practical level, I think downtown merchants need events that will attract visitors when the university is out of session and there aren’t any football fans to fill the restaurants and shops. But it also seems like this is what towns in the Midwest do during the summer—hold lots of festivals and street fairs and outdoor performances, storing up cheerful memories to hold tight when winter arrives. I’m going to miss A2’s biggest summer event, the Art Fairs, which will take place next weekend when I’m visiting family and friends in Philadelphia. But I haven’t been lacking for summer entertainment; just this past week has included the following:

▫ I’m filling gaps in my classic movie knowledge with an ongoing Hitchcock festival at the historic Michigan Theater; Strangers on a Train has a bizarre premise but amazing climactic fight scene (“This is better than Spiderman!” whooped the guy sitting across the aisle from me), while Rear Window kept me on the edge of my seat, in absolute confusion and suspense about how the mystery would be resolved. Today’s feature is To Catch a Thief, which I have seen before—but not in a restored movie palace with an organ concert before the screening.

▫ On Friday evening I had a few errands to run downtown, where I found some of the main streets blocked off for the Rolling Sculpture classic car show. Although I had planned on dispensing with my errands and then heading home for dinner and a book on my front porch, I decided that I might as well take advantage of an unexpected (and free!) entertainment opportunity. So I spent a couple of hours strolling the streets of Ann Arbor while taking in the 300 cars on display. I don’t “know cars”—I overheard a lot of people in deep discussions about vehicle specifications and horsepower and so forth—but I really enjoy looking at the design of old cars and seeing how things changed over the years. And many of the cars on display featured placards telling stories about road trips the owners have taken or how the vehicle has been passed down through generations of a single family. Rolling sculpture, yes, but also rolling history.

▫ Finally, this weekend also included the summer used book sale at the Ann Arbor District Library. Not that I really needed more books to read, but … it’s a sale! And the proceeds support the library! IT’S FOR A GOOD CAUSE. As a member of the Friends of the AADL, I got to enter the sale an hour before the doors officially opened, and I was glad I did—not only did I have first crack at the books, but I also got to leave just as a wave of people flowed into the library’s multi-purpose room when the sale opened to the general public. Note for the future: ALWAYS take advantage of the Friends pre-sale. (As for what I bought, I picked up a bunch of novels and a couple of memoirs—the kind of stuff I like to pop in my bag to read on a plane and can then re-donate when I’m finished. Total cost: $4.)

▪ Speaking of books: if you’re in the Philadelphia area on Thursday night (July 20), stop by the Narberth Bookshop at 6:30 to see me moderate an event featuring author Kaitlin Solimine in conversation with historian Jay Carter. Kaitlin is touring in support of her debut novel, Empire of Glass [Amazon affiliate link], which was just named to the longlist of the Center for Fiction’s First Novel Prize. We still have to confer about event logistics, but I expect that Kaitlin and Jay will cover China, history, and writing in their discussion—three things I’m always interested in talking about.

▪ One thing I forgot to mention last week is that while I’m not doing a whole lot of writing for it, I am editing a new blog for the Association for Asian Studies. #AsiaNow is still coming together—we’re not yet posting as frequently as I hope to in the future—but the idea is to offer a range of material, from announcements about AAS activities to interviews with members about their research to commentary and analysis of things happening in Asia.

▪ I’m not going to put together a full reading round-up of tributes to Liu Xiaobo—you can pick through my Twitter feed for links to many of them—but here are a few pieces of writing that are worth checking out, even (or especially) if you’re not a “China person”:

▫ If you’re really not a China person and want an overview of Liu’s life and work beyond what you’ll find on Wikipedia, read this excerpt from Wealth and Power: China’s Long March to the Twenty-first Century [Amazon affiliate link], by John Delury and Orville Schell, which is posted at ChinaFile.

Tears blind me as I write. Xiaobo: diagnosed who knows when, treated now with cynical and calculating precision, the kind of precision that keeps the high-speed trains of the People’s Republic running on time. A cynicism synchronised so that this dastardly year in which Xi Jinping will duly, daresay humbly, accept a second five-year term as party-state Chairman of Everything can unfold without a political hitch. A diagnosis that, perhaps, will allow a little more time to a man who has been robbed of so much time over this quarter of a century. How did his wife, Liu Xia, put it? Her words break my heart and assault the decency of every thinking person in the world: ‘Can’t operate, can’t do radiotherapy, can’t do chemo.’

▫ Obituaries rarely have much literary styling, so Tania Branigan’s for Liu at The Guardian is notable for its eloquent narration of a complicated life.

▫ In a thoughtful and historically informed essay at the New York Review of Books, Ian Johnson places Liu Xiaobo’s case in a broader context:

This is why Liu matters: his life and death stand for the fundamental conundrum of Chinese reformers over the past century—not how to boost GDP or recover lost territories, but how to create a more humane and just political system.

▫ Perhaps the most dispiriting element of Liu Xiaobo’s final weeks was the near-complete absence of public statements from global leaders (save Angela Merkel and Tsai Ing-wen) calling for the PRC government to release Liu and allow him to seek medical treatment abroad. That used to be a common pretext for dispensing with troublesome dissidents, but in recent years the Chinese government has shown less willingness to play that game, and foreign governments have shown less interest in pressing for change on human-rights issues. Chris Buckley explores this topic further at the New York Times, and Anthony Kuhn covers it in a report at NPR.

I very much want to knock on the door of the office suite facing ours and ask if I can play Jenga for a while.