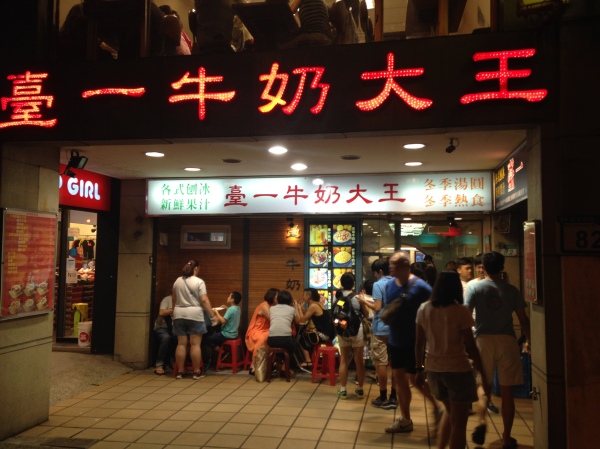 Almost as soon as I have a trip to China planned, I start plotting out my food agenda—old favorites I want to revisit and new places/things I want to try. Since this was a work trip, I spent a lot of meals sitting around banquet tables, eating dishes that were generally delicious but not necessarily what I would order if I were on my own.

Despite the high number of mandatory group dining sessions, I still got to squeeze in plenty of my personal China favorites.

I love Peking duck and appreciated a pleasant meal at longtime Beijing stalwart Quanjude. But honestly, their Peking duck is about the same as what a good Chinese restaurant in the States offers. Far more exciting to me was a delicious dinner at Aimo Town, a Yunnan restaurant nestled inside a hutong in Beijing. It’s really difficult to find Yunnan food in the U.S.—unless you happen to be in the San Gabriel Valley—so while I’m in China I’ll take any chance I have to feast on mint salad, pan-fried cheese squares, sour-spicy shredded chicken with lime, and roasted eggplant with pork. Our table also wound up ordering a second round of pineapple rice, because … it’s rice served in a pineapple. Why not get two? 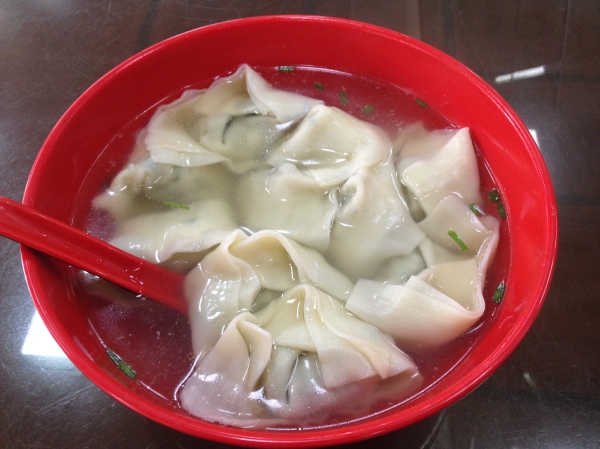 This might not look like much, but it’s my favorite bowl of wonton soup in Shanghai, at Wufang Noodles around the corner from the Shanghai Municipal Archives. I’ve eaten more meals at Wufang than I can count—all costing between 10 and 18RMB ($1.53-2.75)—and while most of them are just decent, the wontons are really good. I prefer the cold wontons, served on a plate with various sauces drizzled on top, but they had run out already on the day I visited, so I had to settle for a bowl of the wonton soup. Still delicious. I think the secret touch is adding ginger to the pork and vegetable mixture tucked inside the wonton wrapper. 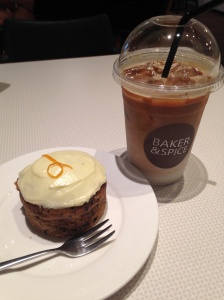 Baker & Spice is the place to go in Shanghai for reliable, albeit mass-produced, bakery treats. Their carrot cake gets most of the attention, and while it is good, I prefer the lemon-zucchini-poppyseed cake. I’m sure I could find a recipe to make my own, but I’d rather just eat it once a year in Shanghai.

One of the fun things to do in Asia is visit local convenience stores and check out the snacks they have for sale. I’ve long loved mala huasheng 麻辣花生, or peanuts mixed with spicy Sichuan peppercorns, and I ate plenty of packets of those during my China trip. I also discovered dried lotus root dusted with wasabi, which quickly became a new favorite of mine (it’s available at Family Mart). One thing I did not love, however, was the “dried lemon snack” I bought on a whim. Turns out eating dried lemon snack is like chewing on sour shoe leather. Fortunately, that learning experience only cost me 3RMB ($.46). 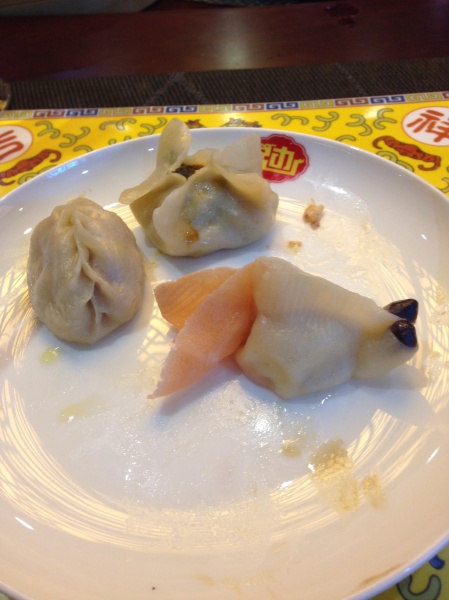 In Shenyang, we ate lunch one day at another old favorite of mine, Lao Bian Dumplings. In Beijing, there’s a Lao Bian branch around the corner from the school where I studied in 2005, and during those six months I ate there at least once a week, and often even more frequently. I love nearly all Chinese food, but dumplings are my hands-down favorite, and Lao Bian’s are reliably good. The only style I didn’t really enjoy was the fish-filled dumplings, which came folded into the shape of a goldfish. They were adorable, but I just don’t consider fish an appropriate dumpling filling—there’s something too delicate about it in contrast to the sturdy dumpling wrapper and strong vinegar sauce.

Breakfasts in Taipei included plate after plate of my favorite fruit, white guavas. I’ve only seen them in Taiwan, and I’m just nuts for them. White guavas kind of resemble an apple in taste and texture, but they’re less sweet. I wish the ShopRite near me carried them, because I’d love to make them a regular part of my diet.

Probably my favorite meal of all three weeks came toward the end, at A-tsai’s Place (阿才的店) in Taipei. Once a popular meeting spot for political dissidents, A-tsai’s serves hearty homestyle food, loaded with garlic and cilantro. The restaurant isn’t slick or stylish—customers sit on low stools, the walls are covered with a jumble of memorabilia, and the haphazard use of extension cords made me a bit nervous—but the food was amazing. Other diners at my table praised the roasted duck, hacked into pieces that we picked through looking for the choicest bits; I, on the other hand, could have eaten an entire serving of the garlicky yuxiang qiezi 鱼香茄子, or “fish-flavored eggplant,” by myself.

Despite the back injury that sidelined me for most of the Taipei portion of the trip, I was determined to have a shaved-ice dessert before I left the island. You can get shaved ice elsewhere, but I’ve found that the best are in Taiwan: a bed of soft ice crystals supporting nearly any topping combo you can dream up, from fruit and panna cotta to peanuts and beans in condensed milk. I did some research online and decided to try Ice Monster, where I arrived to find a long line of people who were all at least 15 years younger than I am. I always feel conspicuous in Asia, and crashing a high-school hangout only intensified that. I ordered a red bean and peanut ice dessert and waited for my table. 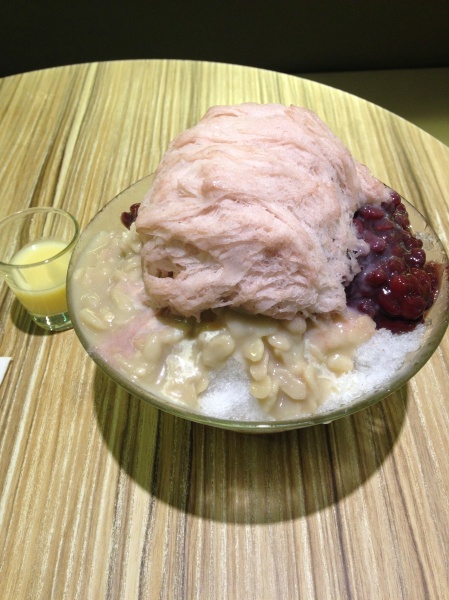 And it was … fine. But it wasn’t great. The ice wasn’t as soft as I’d like, and they’d dumped brown-sugar syrup on it, making the whole dessert too sweet. The puff of red bean “sensation” (creamy whipped ice? I don’t know how else to describe it) on top wasn’t something I’d ever seen before, and just sent the entire dessert over the edge. I couldn’t believe I was walking away from an unfinished bowl of shaved ice, but I did.

So the next day—my last in Taipei—I tried again. I went back to the internet and found this post from the “Hungry Girl’s Guide to Taipei” blog, where she recommended the classic shaved-ice desserts at Tai Yi Milk King, located a short bus ride from my hotel. After a massage and some mediocre dim sum for dinner, I ventured down to Tai Yi and joined the line stretching down the sidewalk. It moved quickly (more quickly than Ice Monster’s), and before I knew it I was at the counter ordering a red bean and mochi ball shaved ice. (Which, incidentally, cost exactly one-third of my dessert at Ice Monster—NT$60 to NT$180, or $1.85 vs. $5.55.) Seconds after I’d handed over a few coins, I was holding a tray with my dessert on it and heading into the back room to find a seat among the crowds. Unlike Ice Monster, Tai Yi attracted people of all ages, from parents with kids to teenagers giggling over their desserts to an older couple quietly chatting as they shared a bowl of mangos and ice.

I picked up my spoon and dug in to pure heaven: perfectly soft snowy ice, chewy nuggets of mochi, red beans mixing perfectly with the condensed milk poured over them. It was exactly what I wanted—a simple, back-to-the-basics shaved-ice dessert.

It took an act of will not to order a second. But sometimes you just have to let perfection stand on its own.

2 thoughts on “Three Weeks in China: The Dining Highlights”

Stopping by the woods on a snowy afternoon. #winter #snow #PureMichigan ❄️