Five Photos from China in 2005 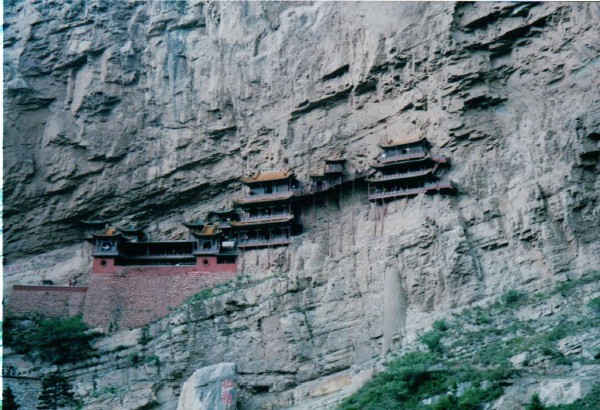 Mid-February always makes me think of my first trip to China, which began when my plane landed in Beijing late at night on February 16, 2005. As I wrote last year, the six months that followed were simultaneously exhilarating and challenging: as much as I loved living on my own and getting to know a completely different country, I often went through periods of feeling totally overwhelmed and alone. When all was said and done, though, my 2005 China life was more good than bad, and looking back now, I’m amazed at how much I stuffed into those six months.

To mark my eleventh China-versary this year, I’ve been looking through old photos (pretty much the last ones I took on a film camera!) and picked out five of my favorite memories to share here.

The study-abroad program I enrolled in sent us out into the city on a scavenger hunt a couple of days after we arrived. Designed to acquaint us newcomers with Beijing, the game had working in teams to criss-cross the metropolis by subway and taxi, visiting different locations and getting photos or souvenirs from each. One of the photos we had to snap was a group shot in Tiananmen Square, and the future historian in me was awed by my first visit to this vast and important space. Very quickly, however, that awe was knocked out of me by the frozen wind sweeping across the square; my group hastily lined up and had our picture taken, then scurried away in search of warmth. That was the day I learned that I had no idea how cold winter in Northern China would be, and that very evening I went to the local big-box store for long underwear (Playboy brand) and a hat with earflaps. They were essential components to my wardrobe until early April or so.

I went on every field trip and weekend excursion my school organized, but it took a couple of months before I felt ready for a semi-independent journey outside of Beijing. Two American classmates and I decided to spend spring break in Shanghai. What I remember most about this first visit to the city I would later call home is that … I didn’t really like Shanghai all that much! The city’s tangled map of twisting streets turned me around and made me wish I were back in Beijing, where a ramrod-straight grid system ensured I could always orient myself properly. Shanghai’s subway fares differed based on distance traveled (rather than Beijing’s flat rate), which meant every ticket purchase required an actual interaction—in Chinese!—with the brusque ticket sellers, a crowd of impatient customers pressing up behind me. The ticket agent at the Shanghai Museum refused to honor my student ID card from Beijing and, despite an impassioned argument, made me pay for a full-price ticket (the museum is now free). There were some aspects of this first trip to Shanghai that I enjoyed, such as walking along the Bund, but it wasn’t until I moved to Nanjing the following year and started spending regular weekends in Shanghai that I truly grew to love the city. 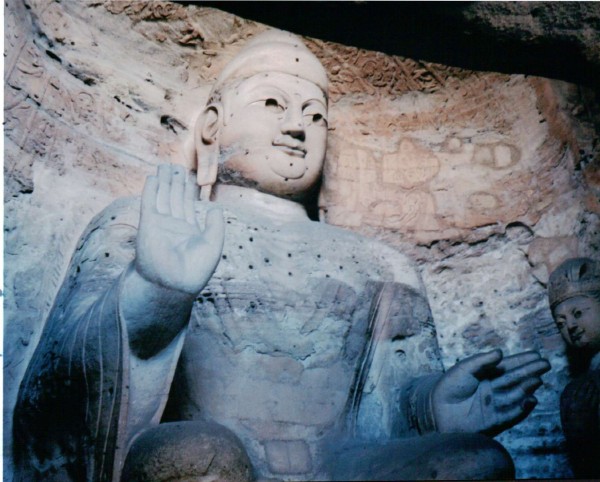 Datong is a smog-choked city in Shanxi Province, a center of coal production that suffers from some of China’s worst air pollution. It was decidedly hazy when my classmate Elaine and I arrived on an overnight train from Beijing one Saturday morning in May 2005. We weren’t there for the coal, though; Datong’s draw was its hanging monastery (pictured at the top of this post) and Buddhist cave art. One of the things that had gotten me into Chinese history was reading Peter Hopkirk’s Foreign Devils on the Silk Road

; I still haven’t made it out to the Dunhuang grottos in the west, but Lonely Planet told me that Datong was an acceptable and more accessible substitute. Elaine and I hired a taxi driver for the day (who promptly asked if his wife could come along for the ride) and set off for the magnificent caves, then headed to the terrifying monastery built onto the side of a cliff. We didn’t linger in Datong—after one day of sight-seeing, we took a sleeper train back to Beijing that night—but after reading an article about the bizarre half-finished Disneyfication that the city underwent more recently, I’m glad I visited when I did.

My school organized this trip. It began with a hike along the “wild wall,” which tested my endurance, and then moved into my very first camping experience, which tested my sanity. The program director had warned us that while the temperature would be fairly high during our daytime hike, it would plummet in the evening, so we should prepare to dress warmly for our night sleeping atop the Great Wall. Despite a couple of layers and a parka, though, all I remember from that night is lying awake in my tent and shivering inside a sleeping bag that seemed to offer no buffer against either the temperature outside or the rock-hard … well, rocks … beneath me. The photo above is of me with the classmate who was my tent-mate for the night. I absolutely cannot remember her name, but I clearly recall that somewhere around 3:00 a.m., as I was starting to feel like a frozen zombie, she suddenly burst into laughter and half-sobbed, “I’m just SO. COLD.” Everything seemed better in the morning, when the whole group stood and watched the sun rise over the wall, but I’ve never been eager to repeat the experience—memorable as it was. 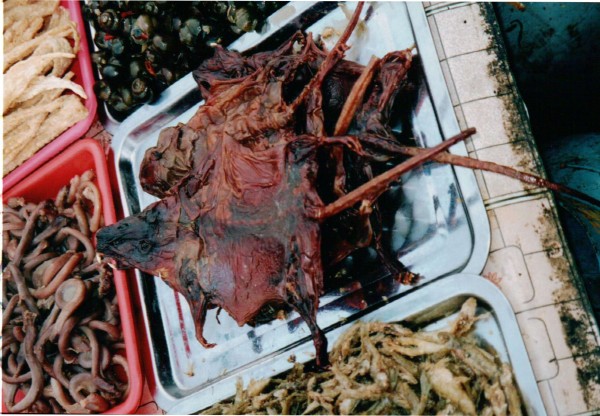 This was purely motivated by my desire to eat something outlandish and have one good “I ate a ____ in China!” story to tell back home. During a week-long vacation in Yangshuo between terms (the same trip when I went hot-air ballooning), Elaine and I went down to the town’s night market one evening. We had heard that the market was the place to go for exotic fare, but upon checking out the stalls, didn’t find much of a selection. One vendor seemed to understand the source of our disappointment and pointed us to a tray of dried rats. Repulsed, I nevertheless agreed—I had already mentally committed to eating something extreme, after all—and the vendor grabbed a rat and chopped it up, then stir-fried it with a bunch of peppers, carefully placing the tail on the top of the plate as he presented the dish to us. Elaine and I each took a couple of bites, followed by long swigs of beer, and then agreed that we’d consumed enough to tell people that we’d eaten a rat. We left the night market and made a beeline for one of Yangshuo’s Western restaurants, where we ordered pizzas. Rat, really, just isn’t that filling.

(And to answer the question I’ve gotten most often, it tasted like beef jerky.)

Closing out my 38th year with two of my favorite activities, both of which I only realized I enjoyed after moving to Michigan five years ago. Morning: @freepmarathon #5K on the #Detroit waterfront. Evening: #hockey game at Little Caesars Arena, where they fling pizza into the stands (I didn’t catch one). A long but pleasant day, and I got to see a nice victory for the @detroitredwings. 🏃🏻‍♀️ 🏒