Like many other things I did during my first trip to China, the hot-air balloon ride wasn’t my idea. I had gone on what was meant to be a two-week tour of Hong Kong and southern China with Elaine (not her real name), an American classmate of mine from Beijing. After several days in Hong Kong, though, we continued on to Yangshuo—and there the tour stopped. Yangshuo, a small town in Guangxi province, had capitalized on its stunning scenery and laid-back lifestyle to turn itself into backpacker heaven for foreigners. The cobblestone streets were lined with cheap but clean hostels; cafes serving pancakes, club sandwiches, and halfway decent pizzas; and bike rental stands that would set you up with a mountain bike for 10RMB ($1.22) a day. Elaine and I decided almost immediately that we didn’t need to go anywhere else; Yangshuo would be our home base for the remainder of the break between semesters.

We quickly established a vacation routine: we’d eat breakfast at one of the cafes, then rent bikes, choose a road out of town, and start riding. Some days we had a destination in mind, while on others we simply rode as far as we could, cycling past picturesque rice paddies and through small towns. Returning to Yangshuo, we’d turn in our bikes and then pick up icy cold cups of bubble tea at a stall where we had become regulars.

We met the hot-air balloon guys at the bubble-tea stall a few days before we had to return to Beijing. They—two Chinese guys in their mid-thirties or so—were wandering Yangshuo trying to sell rides to foreigners. With limited English, their sales pitch consisted of walking up to a target, handing them a brochure, and saying, “balloon ride?”

If I’d been alone, I would have brushed them off without even taking the brochure, the same way I now wave off bus-tour touts in New York every morning as I leave the Port Authority. But Elaine was curious and stopped to talk with the guys as I concentrated on slurping up the starchy bubbles from the bottom of my cup, intent on capturing the optimal proportion of tea and bubbles in every strawful. Only half-listening to their conversation, I wasn’t prepared when Elaine turned to me and excitedly asked, “do you want to do it?”

Well, no. I hate flying. I hate heights. I hate fire. The combination of all three would seem to rule out ballooning. But Elaine was persistent: she really wanted to go ballooning, but it would be too expensive for her to go alone. If the two of us went, the ride would be $100 per person—still an enormous sum, considering our limited funds and tight budget, but do-able.

I laughed. I refused. I protested. I’d thought Elaine was just making conversation with the guys; I hadn’t expected she would actually want to ride in a hot-air balloon. Maybe they could find another single traveler to go in her balloon and split the cost. We were in the middle of rural China; did she really think this was the place to be adventurous? (I suppose from a different point of view, that was exactly the place to be adventurous.) But Elaine wore me down, countering each of my arguments with “think of how much fun this will be!” and “don’t you want to do something really amazing?” The hot-air balloon guys just stood there, pretty certain, I’m sure, that Elaine would make the sale for them.

Eventually, she did, and the guys told us to meet them at the bubble-tea stand in a few hours; we would ride in late afternoon, to catch the sun just as it started to slide from the sky. But when the appointed hour came and we returned to the stand, the guys had bad news: it had become too windy to go that day. We’d try again the next morning.

The following day, we rose when it was still dark outside, dressed, and stumbled out to wait in front of our hostel. The guys pulled up in a pickup truck a few minutes later, a balloon basket strapped down in the cargo area. Elaine and I climbed in to the cab and we took off for the launch site, the truck speeding past the rice paddies and through the small towns that Elaine and I had seen on our bike rides. The entire way, I sat in the truck half-convinced that we weren’t actually going to do this insane thing; somehow, Elaine would come to her senses and change her mind, or the guys would tell us that the weather once again wasn’t good enough to fly safely. We weren’t actually going to ride in a hot-air balloon. Were we?

Eventually, we did. We arrived at the launch site, where another balloon team waited with a foreign couple who would also be flying. We stood around as the guys filled both balloons, the enormous colorful envelopes slowly transformed from a mass of fabric spread on the ground to lightbulb-shaped orbs gently swaying above us. And finally, I reached the point of no return: I was either going to climb into the basket or not. Taking a deep breath and wondering what the hell I was doing, I clambered in and we took off.

A balloon ride over Yangshuo is unquestionably magical. The Guangxi countryside spread beneath us in the early morning light, mist playing off the green karst mountains, the height of the balloon giving us a new perspective on the terrain we had cycled daily for the past week. The world at that height was quiet—except for the moments when the balloon operator turned on the gas jet to add air to the balloon, the sight of which sent me cowering at the side of the basket.

I spent the hour-long ride alternating between feeling entranced and terrified. When I could relax and lose myself in the scenery, I was convinced the ride was the best thing I’d ever done. But when the flame shot up mere feet above my head and I considered exactly how insubstantial the balloon seemed in the vast morning sky, my heart leapt into my throat.

We floated, seeming to drift along aimlessly but obviously following a route the pilots had mapped out, the second balloon always a few minutes ahead of us. Eventually, as the hour neared to an end, the pilot started bringing us closer to earth and we finally landed in the field where we’d taken off, the pickup trucks and original salesmen waiting for us to disembark. 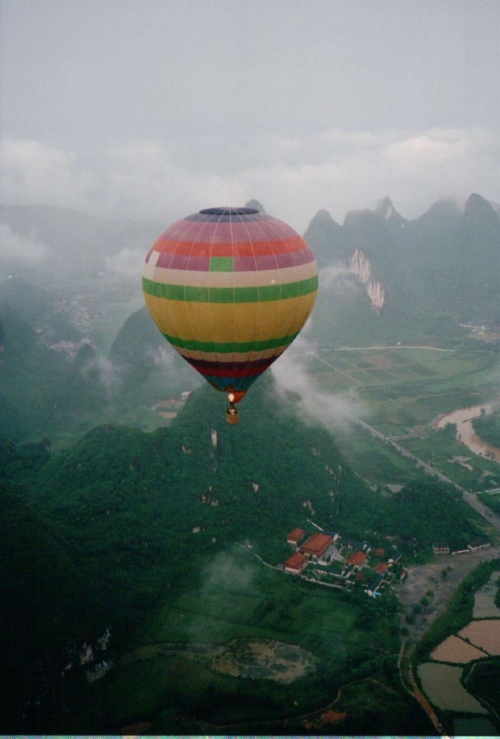 Elaine was entranced; if she could have immediately gone for a second ride, I’m sure she would have. I was experiencing far more mixed emotions: awe, triumph, relief, lingering fear. I couldn’t believe what I’d just done … but also I couldn’t believe what I’d just done. Had I lost my mind? What if something had happened to us? How could I have agreed to something so risky?

In the decade since, that balloon ride has served as shorthand for both the stupidest thing I’ve ever done (well, maybe that’s debatable) and the bravest thing I’ve ever done. When my brother tried to convince me to go on a helicopter tour of Boston last month and I refused (even after he offered to pay for it!), he argued, “I can’t believe you’d go in a hot-air balloon in rural China but won’t fly in a helicopter in the United States.” But when I am not sure I have enough courage to do something, I think to myself, “I flew in a hot-air balloon in Yangshuo. This can’t be nearly as scary as that.”

Spent the afternoon cooking and watching a very frustrating Phillies game. The matzo ball soup turned out well; the game did not.