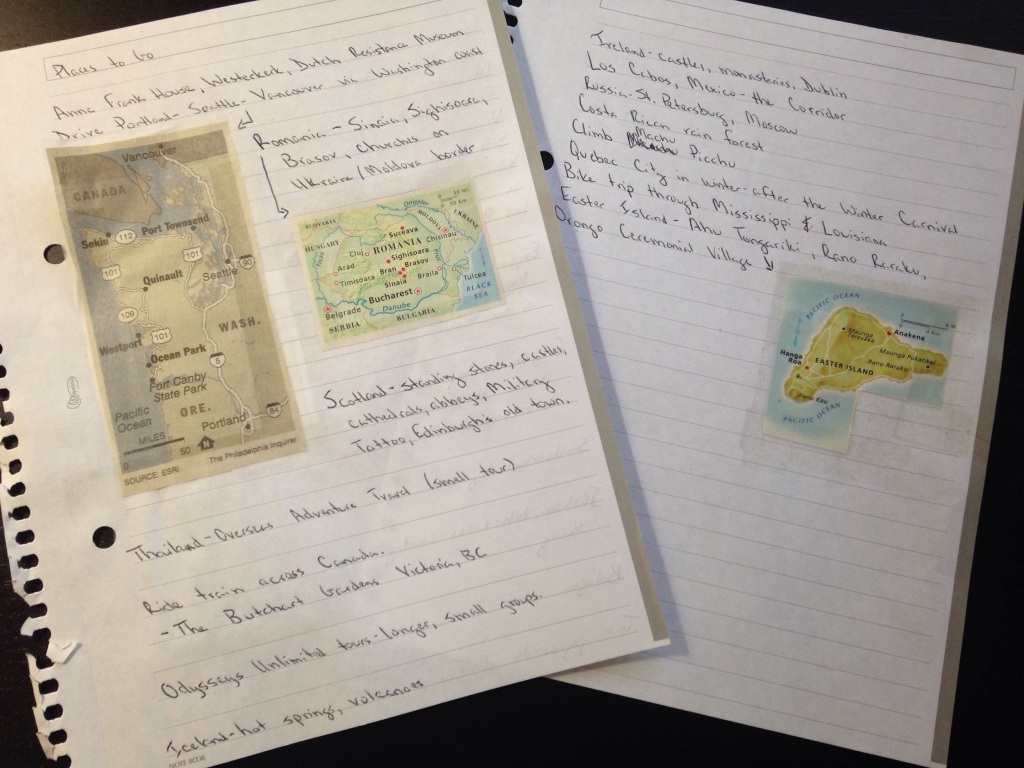 I was a list-maker as a kid. Books I had read, books I wanted to read, clothes and accessories I planned to buy for my American Girl doll, itinerary items for our annual vacation to Bethany Beach, Delaware—I always had a few lists going. My eco-minded mother often finds them now as she works her way through a stack of my old notebooks, filling their unused pages with her own to-do and shopping lists. Sometimes she’ll show one to me and we laugh (Christmas lists are particularly amusing—given that I’ve always been afraid of dogs, I’m not sure why I asked Santa for one more than once), and sometimes an old list will make Mom laugh and me cringe (a diet and exercise plan I copied out of Seventeen). But I rarely look at those old lists and think they have any relevance to my life today.

On my first day of work last month, however, I was packing my bag in the morning and realized that I should bring a notebook with me to get started. I went into my home office and rummaged through a box of stationary supplies, emerging with a black spiral-bound notebook that I vaguely recognized as one in which I made books-to-read lists during high school. I had torn those pages out long ago and thought that the notebook was blank.

I curved the book between my hands and flipped through it to make sure. Halfway through, I noticed a couple of pages with my handwriting on them, small newspaper clippings taped in at spots. I opened the notebook to take a closer look.

“Places to Go,” I had written in the subject line at the top of the first page. Scanning down, I realized that this was my high-school travel wish list, a running tally of places I had read about and wanted to visit, circa 1998. Most of them, I think, were inspired by stories in the Philadelphia Inquirer’s travel section, and the newspaper clippings were maps I had saved to remind myself of the intended journey.

When it comes to travel, I saw, I’ve always dreamed big. “African photo safari” and “Silk Road tour” both appear on the list; so do “Tour pyramids of Egypt” and “Climb Machu Picchu.” Trains play a recurring role; I wanted to cross Canada, Switzerland, and the United States by rail. (Hey, I’ve actually done that last one!) Many of the entries are places that I still very much hope to visit—Amsterdam to see the Anne Frank House, Iceland for the hot springs and volcanoes, Russia for St. Petersburg and Moscow. Others, like the beaches of Bali and the Costa Rican rain forest, have slipped down a few rungs, to “I guess, if I have the opportunity/someone offers me a free trip.” And a couple of entries now hold very little attraction for me—with a small budget and limited number of vacation days from work, I don’t think I’m going to be cross-country skiing in Jackson, New Hampshire or taking a bike trip through Mississippi and Louisiana anytime soon. (The Inquirer’s travel section was eclectic, it seems.)

Two things strike me as I consider this almost-20-year-old (eek) list. The first is how few of its items I can cross off or am likely to in the near future. I’ll turn 34 next month, and seeing all the places 15-year-old me hoped to go—and knowing how many more entries 33-year-old me could add—creates a little bit of panic in my chest, of the “Maura, get a move on!” variety. But at the moment, I can’t. This list was written by someone who didn’t have a mortgage or job or vacation days to consider; her biggest problem was lack of a passport and money.

And it’s not like I haven’t traveled. The second notable thing about this list is that, Silk Road tour aside, China doesn’t appear on it; it wasn’t until I got to college that I realized China was actually a place I could go. No, I haven’t gone to most of the places on this list—but I’ve been to others that 15-year-old me never imagined were possibilities.

I still make lists. The weekend I moved to Michigan, my family and I stayed in a hotel for the first couple of nights, and I spent a few minutes inspecting the hotel’s rack of brochures advertising local attractions. I pulled a handful that appealed to me—the Motown Museum, Detroit Underground Railroad Historical Society, Ford Piquette Avenue Plant—and put them in my handbag to save for later. They’re now in a folder on my desk labeled “Places to Go -Michigan Area,” along with a piece of paper on which I jot down regional destinations as I hear of them. Maybe I won’t climb Machu Picchu anytime soon—but I hear Niagara Falls is worth a visit.

One thought on “Places to Go”

Gochujang pork tacos, with a side of pickles made spicy thanks to numbing Sichuan peppercorns … what a way to kick off a long weekend. Delicious food by @luchapuerco, cooling beer by @homesbrewery. #AnnArbor #A2 #restaurants #brewery #PureMichigan