From Sea to Shining Sea—By Train

For a cross-country trip, taking the train doesn’t make much sense. It’s far slower than flying, and more expensive to boot. But my mother and I both love riding trains and have been talking about doing a big trip for years, so we finally decided that last week’s graduation in Southern California provided the perfect opportunity. On Tuesday afternoon, we set out from the beach town of Encinitas, CA (where we’d spent the previous night with friends of mine), and four days and four trains later, we pulled into Philadelphia’s 30th Street Station.

I’ve traveled a lot in China, but have visited relatively little of the United States—most of my time here has been spent in the Northeast and California. My desire to take the train was less about the ride itself (Amtrak is certainly nice, and way better than any airline I know, but it’s still not a four-star experience) and more about seeing a large swath of the U.S. Mom and I spent pretty much all our waking hours sitting in our sleeper compartment and looking out the window, drinking coffee, cross-stitching (her) and knitting (me), and commenting on the landscape and towns we were passing through.

America, to state the obvious, is BIG. So, how do you get from Encinitas, CA to Philadelphia, PA via Amtrak, and what do you see along the way?

Train #1, the Pacific Surfliner: We began on Tuesday afternoon with a train that I know very well, the Pacific Surfliner, which travels between San Diego and San Luis Obispo. I used to take the Surfliner from Irvine to San Diego and back pretty regularly, and I never get tired of looking out the window and seeing the beaches of Southern California. We saw a lot of impressive scenery over the course of our cross-country trip, but I still consider the Surfliner to have the prettiest views. We boarded in Solana Beach and de-trained in Los Angeles, a journey of just over two hours—an easy and comfortable start to the journey.

Train #2, the Southwest Chief: This train was more or less the reason for our trip; its route is from Los Angeles to Chicago, and left to my own devices, I might have ridden that far and then flown to Philadelphia from Chicago (but I’m glad I didn’t!). Because the Chief leaves Union Station in Los Angeles at 6:15pm, we only got to see a little bit of California before night fell—by the time we woke up early the next morning, we were in Winslow, Arizona (and I had “Take It Easy” running through my head for the rest of the day). We had started out looking at subdivisions and shopping malls in Southern California on Tuesday night, but Wednesday was full of spectacular mesas and red-clay soil in Arizona and New Mexico. Mom and I couldn’t get over the distance between houses in many of the areas we passed through: we’d frequently see a house on top of a hill, with nothing around it for 20 or 30 miles. I like my alone time, but I think that’s a little too isolated for my taste. 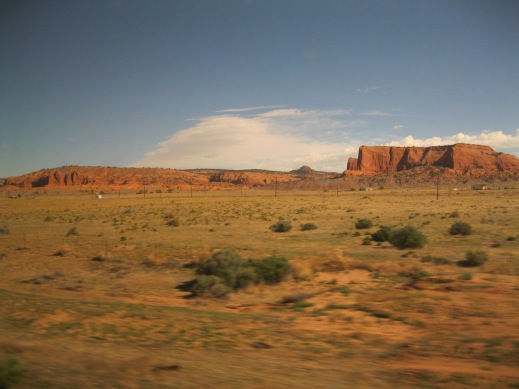 A quick side note about our accommodations, because people have asked: We had regular seats on Trains #1 and 4, but reserved a “roomette” on Trains #2 and 3, the two overnight journeys. A roomette contains two berths, with the bottom one converting into two easy chairs during the day. Bathrooms and a shower room are elsewhere in the train carriage. All our meals were included in the price of the ticket, and we ate breakfasts and dinners in the dining car but elected to have lunches delivered to our cabin. Amtrak food is pretty decent—much better than anything I’ve ever had on an airplane—but the dining car does run out of most things by the end of the trip, and if I were still a vegetarian, I wouldn’t have had many options. There’s also a little bar at the end of each sleeper car with coffee and juice available 24 hours a day, and Mom and I drank many cups of Amtrak coffee (which is generally good) during our travels. In sum: yes, the tickets are expensive when compared to flying, but the accommodations are far more comfortable and Amtrak does the best it can to make you feel you’ve gotten something for your money. 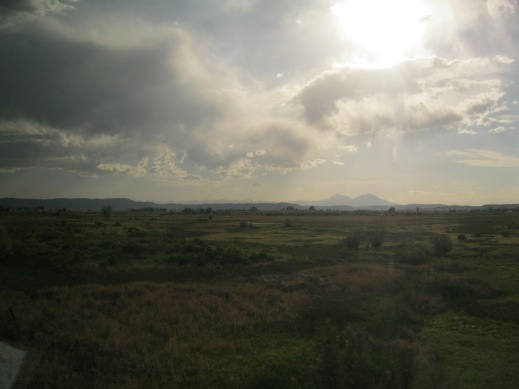 When we woke up on Thursday, we had ridden through Colorado and were in Kansas, and the surroundings had gone from dry and desolate to wet and green. Very wet, actually, as a thunderstorm surrounded the train for several hours. Towns and station stops got closer and closer together, and we started seeing one neatly cared-for farm after another. We rode through Iowa, crossed the Mississippi River, and finally arrived in Chicago at 4:15pm on Thursday—44 hours after leaving Los Angeles, and about an hour behind schedule. Our slight delay didn’t matter to us much, though, as Mom and I had decided to stay overnight in Chicago, a city neither of us had ever visited before.

Chicago: We spent less than a day in Chicago, but both of us almost immediately took a liking to the Windy City. It seemed so much cleaner than Philadelphia (and Shanghai), and we’re both suckers for Art Deco architecture, which Chicago has in spades. We spent several hours on Friday walking around the Chicago History Museum, which is fantastic and fascinating. The museum is extremely well done (well, maybe a little text-heavy) and gives a wonderful overview of Chicago’s growth over the centuries. It also offers an amazing number of programs, like themed bike tours (yes!), pub crawls (double yes!), and the “History Hustle” 5K run (um, no). The history geek in me was in heaven. After the museum, we grabbed Chicago-style hot dogs, picked up our bags at the hotel, and walked back to Union Station to catch our train to Pittsburgh.

Train #3, the Capitol Limited: This was something of a short ride for us, as we departed from Chicago at 6:40pm on Friday and arrived in Pittsburgh at 5:30am on Saturday, giving us just enough time to look out the window before it got dark, eat dinner in the dining car, drink a little too much coffee afterward, and not get a whole lot of sleep. We traveled through Indiana and Ohio before crossing into Pennsylvania, but unfortunately didn’t get to see much.

Before we knew it, Mom and I were blearily sitting in the waiting room of the Pittsburgh train station, which turned out to be smaller and less busy than either of us had imagined. Given Pittsburgh’s industrial history, we had expected to find a huge early-20th-century train station (as in LA and Chicago) with a number of rail lines radiating out from it—maybe not as many as in the past, but at least a few. To our surprise, the Pittsburgh Amtrak station is a single room, and there are only four trains per day servicing the city, two eastbound and two westbound. (After getting home, I learned that the city’s historic Union Station still stands, and we were actually underneath and to the side of the original structure, which is now condos and office space.) Seeing the tiny station and reduced service was an instant lesson in the decline of American industry and how that has affected cities.

Train #4, the Pennsylvanian: It takes seven and a half hours to cross Pennsylvania?!? I have to admit, by the time we reached the midway point at Harrisburg, I was wishing for some China-style high-speed rail. I hadn’t gotten enough sleep the night before and couldn’t focus on the book I was reading (though it’s excellent! Age of Ambition by Evan Osnos), and the seats were too close together for me to knit comfortably. I spent a lot of the trip listening to my iPod and alternately dozing and looking out the window. Again, we saw a lot of small towns that seem to have fallen on hard times, but we also noticed many more attempts to capitalize on history and nostalgia, like antique stores next to train stations and what looked to be a whole collection of old rail cars in Altoona. (That’s because there’s a railroad museum there, I now know.)

And suddenly, once we left Lancaster, I started recognizing things after four days of feeling like a wide-eyed tourist. We sped down the Main Line, passing the areas where I went to high school and college, and the first house my parents lived in. Finally, we curved toward 30th Street Station and I could see the familiar Philadelphia skyline come into view. Somewhat bedraggled and very much exhausted, Mom and I lugged our suitcases through the station and met my father outside for a ride home. (We actually could have taken a SEPTA Regional Rail train from 30th Street to East Falls, but they were on strike.)

Was the trip worth the time and money? Absolutely. I wish I had the chance to get off the trains and really explore the places along the routes, but seeing them through the window was sufficient for now. I would have definitely liked to spend more than 26 hours in Chicago, and I’m now really looking forward to going to the annual meeting of the Association for Asian Studies there next March. Mom and I had fun hanging out together and sharing our thoughts on what we were seeing; in fact, we’ve already talked about making a major train trip an annual vacation together. Amtrak, after all, offers over two dozen routes, and we have a whole big country to explore.

One final note: T-Mobile’s claims to nationwide coverage are lies. Lies, I tell you. I basically had no phone service between leaving California and entering western Illinois. Meanwhile, all the passengers with Verizon were merrily chatting away on the phone. I’ve gotten better coverage on a sand dune in Inner Mongolia (literally).

More photos from our trip are on my Instagram feed.

Bonus: When I wasn’t trying to drive “Take It Easy” out of my head, I was mentally singing my favorite train-related Springsteen song, “Land of Hope and Dreams.”

2 thoughts on “From Sea to Shining Sea—By Train”

Friday lunch and #LunchtimeReading. I haven’t read a #mystery in forever, and the latest by Tana French finally came my way thanks to @aadlgram. Turned out to be seasonally appropriate, as the chilly mist of Ireland in the fall matches the gray skies we’ve had many days this week. Now I want to settle down in front of a roaring fire at a cozy pub. #AmReading