Many thanks to Sue Anne Tay of Shanghai Street Stories, who knows of my interest in Zhang Leping’s Sanmao comics and picked up this pin for me when she spotted it one day in Shanghai. 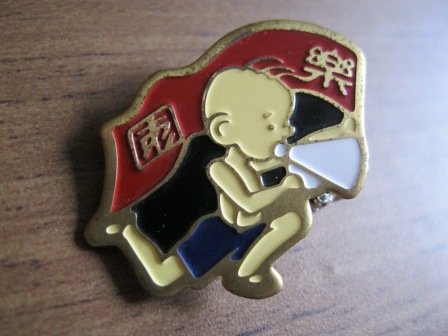 The pin is a replica of one that I’ve seen on display at Song Qingling’s house in Shanghai. Such pins were sold to raise money for the “Sanmao Paradise Club” that Song and Zhang Leping started in the spring of 1949. Coincidentally, I recently wrote a few paragraphs about Zhang, Song, and Sanmao Paradise Club, the story of which I had chosen to serve as the opening vignette for Chapter 4 of my dissertation. So to explain the story behind the pin, here’s a (very) rough draft of those paragraphs:*

On April 4, 1949—Children’s Day—Shanghai’s Sun Company department store opened a special exhibition of artwork by the cartoonist Zhang Leping. The exhibit featured over 300 sketches from Zhang’s landmark work, The Wandering Life of Sanmao (Sanmao liulang ji), which had appeared in the city’s Da gong bao newspaper beginning in June 1947. Zhang, despite suffering from tuberculosis, had also prepared a special set of 30 watercolors that were to be auctioned off at the Sun Company in conjunction with the exhibit’s opening; the proceeds would go toward Song Qingling’s China Welfare Fund (CWF) Shanghai Children’s Programme. Wang Shaoli, President of the Shanghai Chamber of Commerce, had agreed to serve as auctioneer, while children who participated in CWF programs sold Sanmao pins and comic books, in addition to soliciting memberships in the “Sanmao Paradise Club.” Members of the club “adopted” a CWF child and pledged financial support for his or her schooling and medical care. Children who wanted to help, or adults who could not afford to make a regular monetary donation, could offer gifts-in-kind of school supplies, clothing, or food and become “Friends of Sanmao.”

The exhibit, auction, and membership drive were all successful, and they highlight the work of several major figures in the child advocacy movement in civil war-era Shanghai. But they also put a happy, even celebratory, face on one of the most devastating problems affecting Shanghai during the civil war. As the city filled with refugees fleeing the war-stricken provinces, the numbers of “wandering children” on Shanghai’s streets also increased. Organizations like Song’s CWF and the city’s numerous orphanages struggled to assist as many of these children as they could, but the problem continued to grow. Epidemic illness and bitterly cold winters struck the youth population the hardest, and each year benevolent societies collected thousands of bodies from Shanghai’s streets, the vast majority of them the corpses of children. These “real-life Sanmaos,” unfortunately, needed far more assistance than the sale of Zhang Leping’s 30 watercolors could provide.

I very rarely find much Sanmao memorabilia, aside from books (and I have quite a collection of those, I can assure you). The pin is now resting against the Sanmao coffee mug that I picked up at the Zhang Leping Memorial Hall in his hometown of Haiyan, several hours south of Shanghai, when I made a day trip there last year. (I’ll be going back there for a longer visit at some point in the next few months to do research for a big Zhang Leping project I’m working on—stay tuned for more details.) Thanks, Sue Anne!

* This marks the first time, I should add, that I’m sharing a single word of my dissertation with anybody. I’m about halfway through Chapter 5 (the first chapter I’m writing, for some very boring but practical reasons) right now and am at the point where I can’t even imagine sending this messy pile of words on to my adviser, let alone allow anyone else a glimpse. Don’t expect these sneak peeks to come along too often.

I’m always so excited when it’s briefly warm enough to open my windows and enjoy a light breeze, even though I know very well it’s March 3 and this is just the first of multiple Fake Springs we will get tricked by in #PureMichigan.