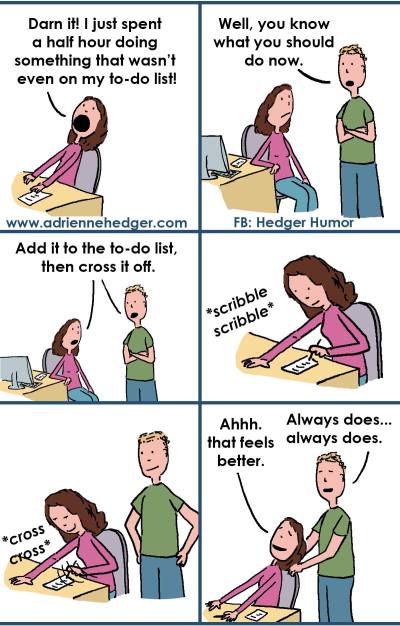 I have three to-do lists, in three different formats, going at all times. First, there’s the legal pad that lives on my office desk that contains my work to-do list. That one is straightforward. Second is my daily home to-do list, a habit I picked up from my mother. Like her, every morning I take a piece of scrap paper and fold it in half, then write down absolutely everything I can think of that I need to do that day, even the stuff that I do every day and would never forget (“shower” “wash dishes”). I don’t go to the extreme of jotting down “wake up” or “eat lunch,” but it’s pretty close. I try really hard to keep that list both specific and realistic; I don’t just write “knit,” but rather “knit two pattern repeats on hat,” and I don’t say “answer all emails,” but “email X, Y, and Z” instead. My goal every day is to have all the items on that list crossed off by the time I go to sleep. I rarely achieve that goal, but I often get close enough to remain happy with myself.

But then there’s my master to-do list—the monster that resides in a Word file on my computer desktop. That list is everything I need or want to do EVER, from “buy a birthday card for Mom” to “swim in the Blue Lagoon in Iceland.” Bills to pay, blog posts I want to write, things I want to buy—as soon as I get a notice or have an idea, I put it on the list. As things get done, I strike them out, and every once in a while I go through the whole file and delete all the struck-out lines to tidy things up.

I’m not so good, however, about deleting things that should no longer be on the list at all, and as a result, that master to-do list is long. Very long. So long that just opening up the file and seeing all the stuff I have yet to do is enough to discourage me. Where do I even start?

I finally decided last weekend that the time had come to declare to-do list bankruptcy. I know people who periodically declare email bankruptcy, deleting/archiving all unanswered messages older than a specified period of time and telling themselves that anyone who really needs an answer will write again. I definitely need to do a thorough clean-up of my personal email inbox (I’ve slipped away from Inbox Zero, which always used to be my goal), but that’s not my main organizational problem right now. The to-do list is.

There are many entries on that master list that are absolutely never going to happen—and which no longer need to happen. Their time has passed. For example: I took a trip to Utah last October and intended to write a blog post about it. I haven’t. And given that I didn’t take great notes during my trip and can’t begin to recapture the things I meant to say at the time, I never will. It should not still be sitting on my to-do list, a frustrating reminder of one more thing I planned to do but never managed to get done.

So that master monster to-do list? I’m wiping it clean. Declaring to-do list bankruptcy and starting fresh. I have, of course, “creditors” who need to be “paid”—certain things on the list can’t just be swept away (Mom, I will buy you a birthday card, I promise!), and those entries will be transferred to the clean list I’m starting. But I’ve also realized that I need to break down the master monster list into sub-categories to keep things straight, and also not overwhelm me. “Swim in the Blue Lagoon in Iceland” belongs in a category called “Travel Ideas,” not mixed in with “Pay Visa bill (due Feb 22)” and “frame Ph.D.” (someday). (And those two entries belong in “Financial Stuff” and “Household Tasks,” respectively.)

I hate the feeling of looking at my master to-do list and acknowledging that the time has come to declare bankruptcy. I wanted to do all that stuff. I planned to do all that stuff. I really, really thought I could, if I just budgeted my time properly. But that doesn’t always happen, and I often bite off more than I can chew. Throw in the unpredictabilities of life, and the result is a long, intimidating list of good intentions that are simply never going to be realized.

So it’s time for a clean page and a fresh start.

In the middle of writing this post, my colleague Kate showed me her Trello to-do list setup, which is amazing. I’ll admit that I can easily fall victim to thinking that the right tool will solve all my problems, but Trello looks like it offers the kind of task categorization and workflow assistance I need right now. And since I’m starting fresh, this is a natural opportunity to give Trello a try. I’ll see how it goes.

So-true-it-stings cartoon by Adrienne Hedger and used with respect and admiration.