I’ve written here before about how much I love suburban Philadelphia’s Longwood Gardens: the park is beautiful, it’s elegant, it’s timeless. My grandparents took my mother and her sisters there, just as my mother took my brother and me there when we were little, and while some elements changed in little ways over the decades, we all saw essentially the same features: the Flower Garden Walk, the Main Fountain Garden, the Chimes Tower, the Conservatory. The Italian Water Garden in my grandfather’s slides looks pretty much exactly like the Italian Water Garden in my iPhone photos. Longwood is wonderful, but it’s very … staid.

When my mother, brother, and I visited last Saturday, though, we saw that some things have changed, and Longwood is starting to let its hair down after dark.

The three of us arrived in late afternoon and immediately started walking the same route we’ve followed for the past three decades (or longer, in Mom’s case). Down the Flower Garden Walk and past the Large Lake to the Italian Water Garden … 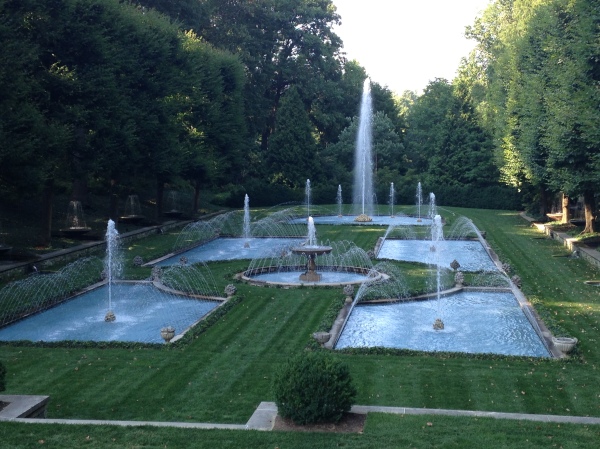 then up to the Peirce-du Pont House. But when we left the house, we realized that there was a path leading away from it that we’d never seen before. Consulting the park map, we saw that a new Meadow Garden had opened, so we headed that way and found scenery straight out of a van Gogh painting: 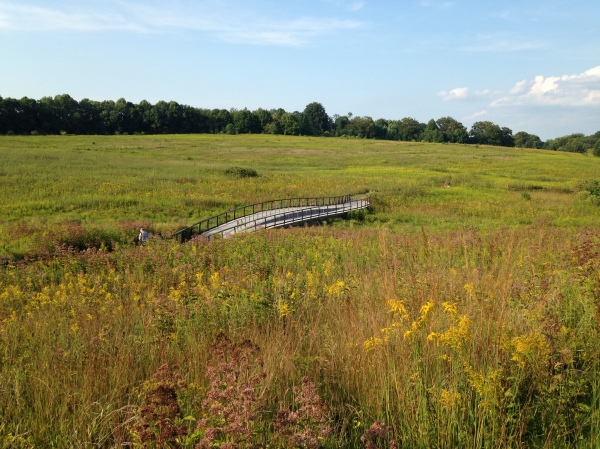 We walked part of the Meadow Garden trail, but it was surprisingly hot for so late in the day and so we decided against covering the full three miles. Some other time.

Emerging from the Meadow Garden and meeting back up with our regular route, we made a quick stop by the Topiary Garden before heading up to the Conservatory, where we saw the full extent of what Longwood’s two-year “Fountain Revitalization Project” means:

The Main Fountain Garden—the centerpiece of Pierre du Pont’s legacy at Longwood—has been largely plowed under. An exhibit showed how the original fountains will be restored and the plumbing rebuilt between now and 2017. It will be beautiful, but it’s a long process and in the meantime, one of the garden’s signature attractions is unavailable.

So it makes sense that Longwood has thought up a new offering for visitors this summer: “a light and sound experience” called Nightscape.

Nightscape didn’t begin until 8:30, so we ate dinner in the cafeteria and got drinks from the new beer garden (although I didn’t really like the special “Longwood Summer Zest” on tap and wound up giving it to my brother to finish) while waiting for the sun to set. Once it was fully dark out, the three of us ventured over to the Conservatory to view the first three Nightscape features.

Nightscape involves light shows projected onto different garden exhibits while techno music fills the air. As Technical.ly Philly wrote, the experience “is trippy as hell.” It’s also really mesmerizing: at the first stop in the Conservatory, we stood and watched a giant ball change color over … and over … and over.

Finally snapping out of it, we joined a huge line waiting to get into the Palm House for the next installation. This was the most like being in a club: neon lights strobed off the palm fronds while ominous electronica played over the sound system. (The first 35 seconds of this YouTube video convey the experience much better than my photos did.)

The final Nightscape setting in the Conservatory was in the cactus-filled Silver Garden, which has never been my favorite—other gardens are much more colorful and interesting. But the rock and cacti served as the ideal canvas for the Nightscape lights, which created a moving, changing, crazy quilt of images blanketing the otherwise pitch-black room. It was otherworldly. 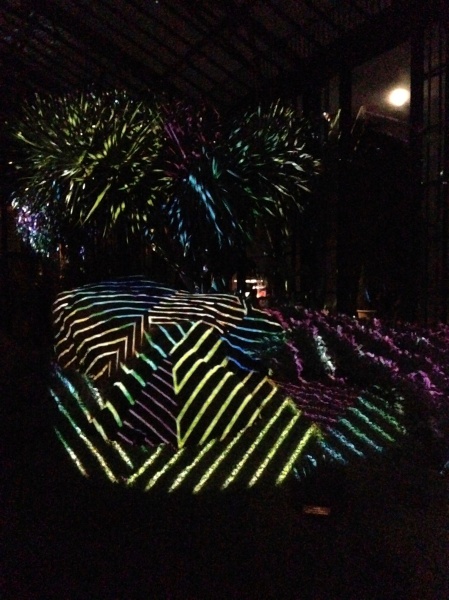 Moving outside, we retraced our steps to the Topiary Garden, where the manicured bushes were turned into Mayan-inspired Rubik’s cubes. Each layer of the topiaries had a different image projected onto it; they rotated and gave the impression that if the layers would just align, the patterns would come together. But they never did—though again, we found ourselves standing for a very long time just watching the patterns rotate.

Some of the sections along the Flower Garden Walk had small Nightscape features, but the next really significant thing to see—and by far the largest Nightscape installation—was down at the Large Lake, where a movie of sorts was projected onto a massive wall of trees. Unfortunately, this was also the one Nightscape scene that really fell flat. While the other scenes had been abstract, this one told the story of a garden going through the four seasons of the year—but I didn’t realize that until doing some reading online later. We arrived at the lake during the winter section, so for a long time we just watched subtle white lights drift across the trees (meant to convey falling snow). Ready to move on after a few minutes of this, we started walking around the lake and suddenly realized that the music had picked up and the lights come alive—it was, I figured out later, the summer section of the show. That was pretty amazing: the lights formed fish leaping from the surface of the lake and water splashing behind them, with dragonflies swooping overhead (poorly captured in this series of photos I took, though click the photo for a larger version and it becomes somewhat clearer).

When the summer section of the four seasons show really got going, it was incredible. But the rest of the sequence was too slow and subtle—and at the time, we didn’t even realize that we were watching the four seasons.

It seems that Nightscape has been a huge success for Longwood Gardens—tickets regularly sell out—and since the Main Fountain Garden will still be under construction next summer, I assume there will be a Nightscape 2016. I’d like to see even more of the gardens brought into the experience; there was a little too much downtime between the installations, and parts of the route were so dark we stumbled around a bit. The three Conservatory sites were definitely a highlight, and I liked the Topiary Garden as well. (The beer garden isn’t bad, either, even if I didn’t love the featured drink.)

Viewing Nightscape was really seeing Longwood Gardens in a whole new light (no pun intended); it was at times an intense and even disorienting experience. But I’m really glad that after playing it safe and staid for so many decades, they’re experimenting and trying new things, even if some parts could be improved. It was definitely not my grandfather’s Longwood Gardens—and that’s a good thing.