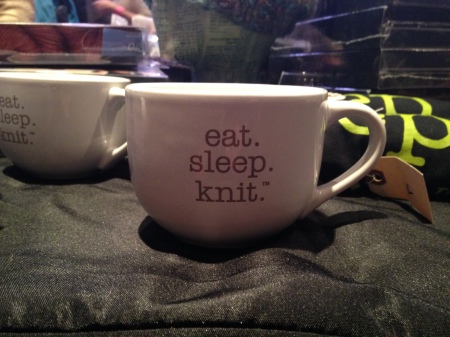 (Random side note: although I loved both of my apartments in Shanghai, one thing neither ever offered was quiet, primarily due to the incessant renovations other residents were always undertaking. It just struck me how wonderful it is to sit down with my coffee and laptop early on a Sunday morning and write without the rattle of the despised hammer-drills distracting me. Ten points in Jersey City’s column.)

I changed my mind half a dozen times about whether or not I would go to Vogue Knitting Live! in New York this weekend. I didn’t learn about the show until last week, so almost all of the classes were already filled to capacity, and the few remaining didn’t appeal to me. If I went, my participation was going to be limited to buying a $20 Marketplace ticket and wandering around a big sales hall of yarn that I shouldn’t buy at a time when there are other outlets for my money. (I have plenty of yarn. I do not, however, have a sofa.) Twenty dollars to window shop and talk myself out of impulse purchases didn’t seem like a responsible use of funds.

I wanted to go. I wanted to see what a knitting show was all about, as I’d never been to one before. I wanted to check out new patterns and get inspired, because I seem to be stuck in a scarf rut. I wanted to see interesting yarns in person and make mental notes about what I should buy when I have more(/any) disposable income. And spending a few hours at a knitting show seemed infinitely more appealing than unpacking the last of my kitchen boxes. (Which I will do today, it’s on the list, I swear. I hate moving.)

Saturday morning, I made the final decision as I was eating breakfast: I was going. I accessorized my outfit with some favorite hand-knits, as I had a suspicion that one wants to show off one’s best creations at a knitting show, and made my way up to the Marriott at Times Square. Twenty dollars handed over at the ticket booth and I was sporting a hot-pink wristband allowing me entry to the two-floor Marketplace.

I realized about 30 seconds after walking into the Marketplace that there was actually very little danger that I would walk out with a bag stuffed full of yarn. The hall was so packed with people that we could barely move through the aisles; making my way into the tiny and crowded booths to inspect yarn up close seemed an exercise in futility, and making [responsible] purchasing decisions practically impossible. It’s a good thing that knitters tend to be a friendly and understanding group of people, because everyone kept bumping into each other as they inched through the Marketplace. This provided many opportunities for conversations about the hand-knits people were wearing—as I’d expected, nearly everyone had donned at least one of their finished objects. I heard a lot of exclamations of “That is so beautiful! Which yarn is that?” and “Don’t tell me you made up that pattern yourself!” (One guy asked me which pattern I’d used to make the scarf I was wearing, which satisfied the desire of my knitter’s ego for recognition.)

I did one slow circuit of the room, ducking into less crowded booths to check things out whenever I could. There were quite a few yarn producers exhibiting their wares, as well as many knitting stores selling various luxury yarns, plus every knitting accessory you can imagine: shawl pins, stitch markers, fancy needles, yarn bowls, “knit one, sip two” wine glasses, pillows that massage your lower back to prevent pain while sitting and knitting.

“I just like to pet the silk,” one shop owner told me, and while this statement might seem bizarre to non-knitters, I completely understood. I can’t stand scratchy yarn; tweedy Irish wool might look nice, but it’s hell to wear. When I’m yarn-shopping (or browsing), soft wins. Merino wool, silk, cashmere, bison, qiviut … oh, qiviut. One shop had some beautiful qiviut for $220 a skein—a little outside my price range.

When I needed a break from the Marketplace after an hour, I went out into the gathering area and found the “Seven Wonders of the Yarn World,” an exhibit of models created from yarn and different knitting techniques.

I ate the lunch I’d brought (and noticed many others at nearby tables also eating brown-bag style; knitters tend to be a thrifty bunch, except when it comes to buying yarn) and pulled out the scarf I’ve been working on to get in a little knitting time. All the tables around me were filled with women doing the same,* often sharing advice and trading knitting war stories or pulling out their phones to show off pictures of projects. (I heard more than a few “my husband’s gonna freak out if I come home with one more skein of yarn” jokes, too.) I mostly prefer knitting alone—it clears my mind and gives me something to do while I watch TV—but there’s something pleasant and companionable about being surrounded by a knitting community, too. 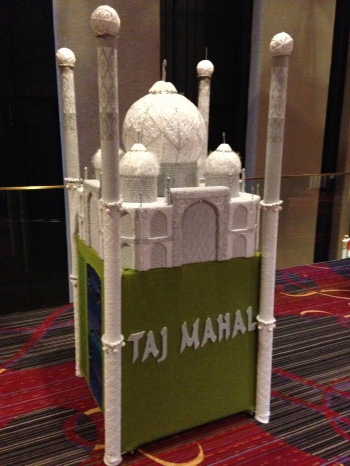 Eventually, I put my scarf away and headed up to the second floor of the Marketplace, which was even more crowded than the first. The second floor had a lot of big booths and some of the superstar vendors, as well as the main stage, where fashion shows were taking place. It. Was. Insane.

Without a doubt, my favorite element was the “knitting as art” exhibit outside the second floor of the Marketplace, where people who take knitting to another level were showing off their work. I saw wearable knitted animal-head masks and knitted glass, knitted toys and dolls and close-up photographs of knitted work. The exhibitor who really takes the cake (pun intended), though, was “Madame Tricot,” who knits sculptures of food. She had a sweets table 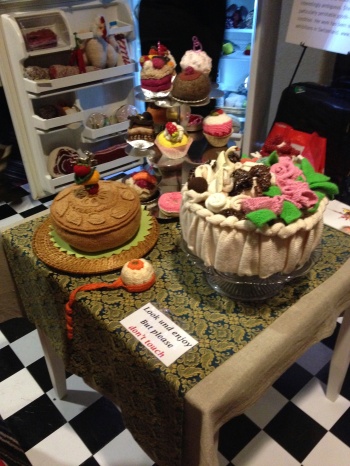 And a well-stocked fridge.

Perhaps predictably, I did not attain my goal of leaving Vogue Knitting Live! without buying anything. But I also didn’t leave VKL with much. I bought a pattern (for the Grus cowl; $6) and one skein of a hand-dyed lace-weight yarn from a farm in New York ($16). Plus, I saw a lot of cool knitted stuff, added half a dozen patterns to my Ravelry queue (now 436 project long; I might need to quit my job and knit full-time), and decided that yes, Vogue Knitting Live! is more than worth the price of admission. Sign me up for next year.

* Knitting is overwhelmingly a women’s hobby; I saw a few men at the show, but they probably composed under 10% of vendors and attendees combined. Several were clearly bag-men brought along by their wives to carry the woman’s purchases and leave her hands free to pet the yarn.