The Hot Spots and Storied Plots of Laurel Hill Cemetery

“The Cemetery Gift Shop Is Open” wasn’t the first thing I expected to see as my mother, brother, and I approached the main office at Laurel Hill Cemetery last Saturday morning. A gift shop at a cemetery? But indeed, we walked into the room and found a small store selling books and postcards of historic Philadelphia, Laurel Hill sweatshirts and coffee mugs, and a variety of skeleton-themed knick-knacks. The people running Laurel Hill these days bring a sense of humor—and an entrepreneurial approach—to their business.

Laurel Hill’s main entrance sits barely five minutes from my parents’ house in Philadelphia’s East Falls section, but we had driven past it for years without ever entering. On occasion, my mother and I would note an announcement of a tour in The Fallser, often intending to go but waylaid by some other task. This time, though, we had made a plan and stuck to it: we’d seen that Laurel Hill would be offering its introductory “Hot Spots and Storied Plots” tour on a Saturday morning when I would be in Philadelphia, we’d planned to go, and we’d actually made it. 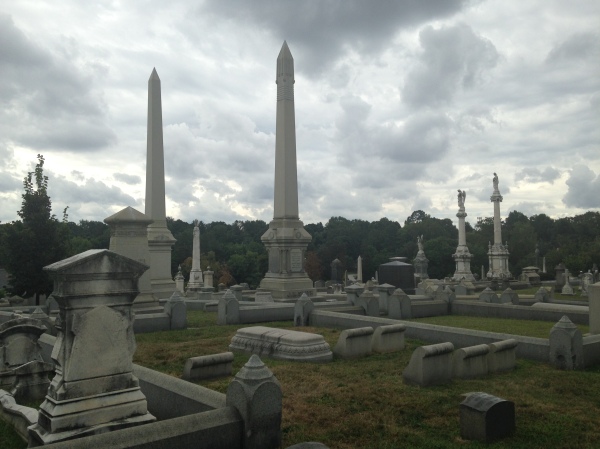 After paying the tour fee, we met Nancy, our guide (who wore a shirt printed not with polka-dots, as I initially thought, but skulls), and the other three members of the tour. Dark clouds in the sky and a catch to the wind provided suitably spooky ambiance, but also suggested why the group was so small.

For the next two hours, we followed Nancy on a fascinating walk through the grounds of Laurel Hill, the second oldest “garden cemetery” in the United States. Founded in 1836, Laurel Hill was part of a movement away from churchyard burials. With the rapid growth of Philadelphia in the early 19th century, graveyards in the city had become overcrowded and unpleasant places. When librarian John Jay Smith went to visit the grave of his young daughter in a city cemetery, he was unable to locate it; this traumatic experience led Smith to decide that Philadelphia needed a better place to bury its dead. 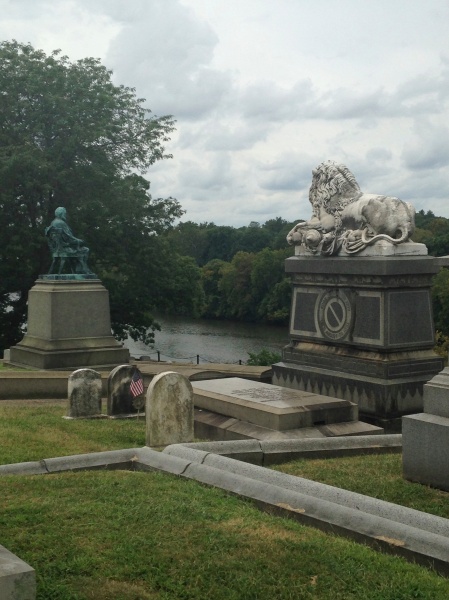 Smith joined with other Philadelphians also interested in this venture, and the group scouted out an appropriate location, finally choosing the Laurel Hill site, a former country estate. Sitting five miles up the Schuylkill River from the city center, Laurel Hill seemed so remote that future urban growth could surely never reach it. The land offered easy river access (people and coffins generally traveled to Laurel Hill by steamboat in the 19th century) and verdant land that could be shaped into a bucolic garden overlooking the water. Engaging Scottish architect John Notman, the cemetery founders transformed Laurel Hill into Philadelphia’s premier eternal resting place. 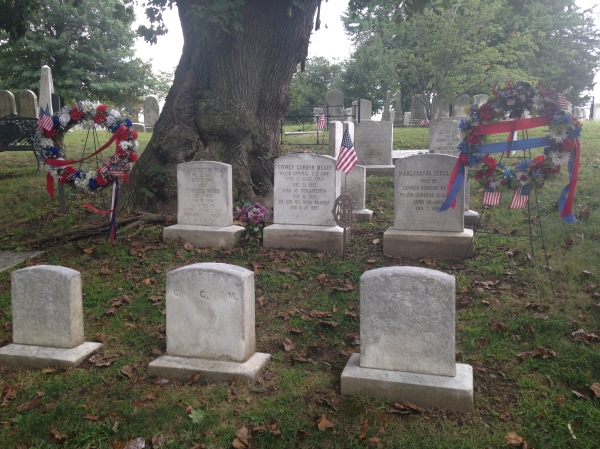 In part, that was accomplished by the same practice that restaurants and stores today use to attract buzz: get the famous people to go there. In Laurel Hill’s case, early on those famous people were mostly Revolutionary War veterans; the cemetery founders convinced families of noted deceased veterans to relocate their loved ones’ remains to the new cemetery, establishing it as the place to be seen when you’re dead.

Laurel Hill grew steadily over the course of the 19th century, its green hills increasingly studded with monuments—most plain, but some quite elaborate. As we were on the basic introductory tour, Nancy focused on pointing out the cemetery’s most famous occupants, ranging from Civil War general George Meade to legendary Phillies broadcaster Harry Kalas. (Meade’s used to be Laurel Hill’s most visited gravesite; recently, though, Kalas overtook him in visitors.) We also saw one famous fictional grave: <spoiler alert> the tombstone for Adrian Balboa used in Rocky Balboa, now carefully tended off to the side of the main burial grounds.

With an estimated 75-100,000 people buried within its gates, Laurel Hill’s occupants are so varied that a tour can be designed on almost any theme imaginable, like “Classy Broads and Daring Dames: Ladies of North Laurel Hill” or “Philadelphia Lawyers at Laurel Hill.” And, as I said, the Friends of Laurel Hill today are as entrepreneurial as John Jay Smith and his colleagues were in the 1830s. The cemetery hosts yoga classes and a “graveyard cabaret,” as well as a car and hearse show, a 5K run, and the “Gravedigger’s Ball.”

The Friends seem to have an approach that emphasizes respect for the dead and the historic site in their care, but also has some fun with the quirky history and stories that have accumulated over nearly 200 years. And most of all, they present Laurel Hill not as a forbidding or spooky place, but as a picturesque retreat from the city that now surrounds it. As 19th-century city-dwellers came to Laurel Hill for picnics and carriage rides among the gravestones, visitors today are encouraged to use the cemetery as a place for (respectful) recreation. There’s nothing wrong, in other words, in going to the cemetery and having a good time.