“Marley was dead: to begin with.”

The plummy voice of Julie Andrews rings out through the Grand Court of Center City Philadelphia’s Macy’s store every hour on the hour throughout the month of December. As children (and more than a few adults) crowd for seats on the floor of the Grand Court, Andrews invites them to enjoy the Christmas Light Show, “a brilliant holiday spectacular celebrating the color, warmth, and joy of the Yuletide season.” Philadelphians have been enjoying the 15-minute light show since 1956, when what is now Macy’s was still John Wanamaker’s flagship department store, offering shoppers nine floors filled with goods to buy. Wanamaker’s folded in the 1990s, and Macy’s now occupies only three floors in the building (the remainder is now office space—including the healthcare company where my father works). But the light show remains.

Rather than try to explain exactly what the light show is, I’ll make things simple and give you the chance to watch a bit of it yourself.

Here’s the original John Wanamaker light show, in a video made in the 1980s. At that time, local broadcaster John Facenda narrated the show, which included “dancing water fountains” that have since been removed.

Other than those alterations (and a switch to LED lights in recent years), the light show is still largely the same as it always has been. It’s probably Philadelphia’s most iconic Christmas tradition, and while I haven’t gone to see it every year of my life, I’d say I’ve watched 15 or so performances over the decades. 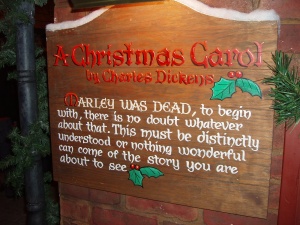 Even more than the light show, however, I love the Dickens Christmas Village that’s now also housed in Macy’s. The village exhibit originated in 1985 at another major department store, Strawbridge and Clothier, that used to be located a few blocks down Market Street from the Wanamaker Building. Like Wanamaker’s, though, Strawbridge’s has closed; that building has stood vacant for the past few years, but will soon become the new home of the Philadelphia Inquirer. Fortunately, Macy’s took over the Dickens village and installed the exhibit on the third floor of its store, so holiday-minded shoppers can now get two unique Christmas experiences in one place. 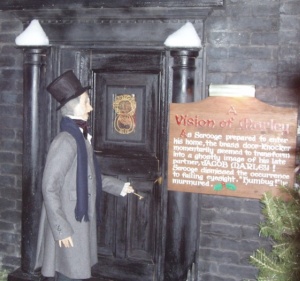 The Dickens village consists of a series of walk-through dioramas relating the events of A Christmas Carol. Somewhat hokey animatronic figures act out the major scenes of the story as appropriate (though again, rather cheesy) sound effects are piped in around visitors. While the light show is enchanting, the Dickens village can occasionally be scary—I remember that as a child I was terrified of the scene where Scrooge’s door knocker glows and turns into the face of Jacob Marley (photo at right). Likewise, the vignettes depicting Scrooge’s visit from the Ghost of Christmas Future resemble more closely something from a Halloween haunted house than an uplifting Christmas tale. Yet I find the whole experience charming: the fake cobblestones lining the path visitors walk on, the figures clothed in Victorian dress, the earnest expressions on Tiny Tim’s face. Compared to the light show, the Dickens village is low-tech and subdued, but I suppose it’s the historian in me that enjoys walking through the streets of 1840s London. 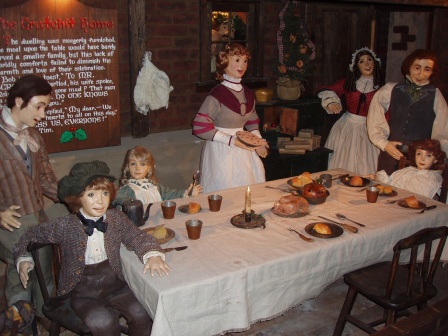 It’s also for that reason that I’m so glad these two pieces of local history have been preserved, despite store closings and consolidations. Christmas in Philadelphia, to me, just wouldn’t be the same without them.

Around and around and around I go … still #knitting my @fiberstory Gradient Scarf, almost done with the third pair of colors in pattern repeat #1. Some days working on this project is meditative and calming, a way to keep my hands busy during webinars or baseball games. Other days I long for more variety and find myself calculating how many of these stockinette rounds I have knit and how many I have left to go. On those days, I’ve learned, it’s best if I put my needles down and come back when I’m no longer tempted to do math.